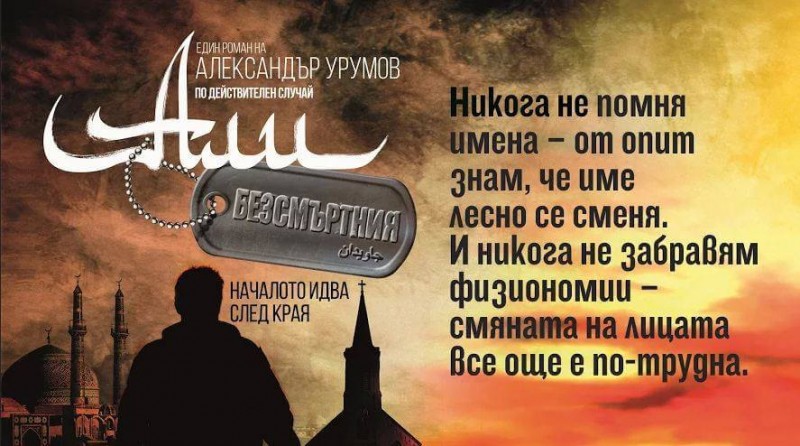 
Alexander Urumov completed his first novel “Ali, The Immortal. The beginning comes after the end”, written on a true story. The author decided to make his first public presentation through his page on FaceBook. The book already has its own page in the social network, where it is presented with a short annotation:

Ali is a violence machine. Iranian, born in Tehran, he goes to fight in the war between Iran and Iraq, willing to become a martyr for Iran and Islam. Participates in the most brutal combats and always returns alive. It’s been said about him that he is elusive for bullets, which wan him the nickname The Immortal. With this fame he comes in our country in the beginning of democracy and turns into an effective and extremely merciless executor of “errands” in the underground world. He is tried for murder, abduction, participation in an organized criminal group, armed robbery; drugs’ trafficking…
14 years spends in prison. 4 of them – incarcerated in a single cell. Dangerous recidivist.
However, everything changes when at his consecutive detention the Bible falls into his hands in his native Persian language. Now, Ali will have to go back on his old paths but already as a new man.
And it isn’t going to be any easier than before. Because no one won’t believe him.

Alexander Urumov used to be vice editor of the weekly edition of “Macedonia”, speaker for the Ministry of Defense, and then working in the area of the political and crisis PR. Since 2006 he leads the department for “Public Relations” of the BNB.
In 2002 he published his first book “Jesus Christ – power and politics”, in which he analyzes Jesus of Nazareth as political factor in ancient Judea. In 2009 is published the collection of narratives entitled “Tales at the end of times” (awarded at the National competition for debut literature “Southern Spring” – Haskovo).
In 2010 Alexander Urumov makes his debut as a play-writer with the monodrama “Souslik” and receives flattery responses from audience and critics and becomes one of the most visited plays for the season. In 2011 the dramaturgical text of “Soulsik” receives the prestigious nomination for “Askeer” for achievements in the theater arts.
In 2013 is published his book with short stories “Pumpkin! Botany of the feelings”.