In painting he finds freedom. Freedom to express one’s feelings, to give life to your dreams. Painting gives him the strength to easily bear even a difficult period of his life: serving almost three year sentence in Sofia Central Prison. He doesn’t want to talk about the reasons taken him there but he claims it is an error. However, he looks philosophically to this matter:

“I didn’t think that I am in prison at all. I was thinking about my wife, my children and what I am doing at the moment. I am not one of those people who would grumble for being in prison. After all, people live in prison, too. One is to develop continuously, has to experience advancement in his life. Otherwise he is a failure. I say this out of experience because I’ve also been a drug addict for ten years when I was younger.”

The tendency to ponder on deep life matters is the reason his friends to start calling him with the nick name “Cosmos”. “They though it matches my character”, says he. Hristo has graduated pottery at one of the schools in the capital for applied arts. His interest for painting has awakened since he was a child.

“I must have been around 2 when I have carved on the wall something like a Cro-Magnon fresco – he tells us laughingly. – It looked like a toothy monster, rather like a crocodile, but I have been telling it’s a wolf. My father kept it for a long time. He would do some repairs but around it. My mother was the one that noticed that it comes handy to me and that I love painting and molding. She supported me. They have been sending me to all kinds of art activities since kinder garden. When in pre-school I won my first prize with an aquarelle about spring. Later, at school, I was selected to do the wall-newspaper. I had a teacher named Boyanov, I still remember his name though this was 25-30 years ago. At that time he took notice of me and started giving more attention to my skill and supporting me in the painting.”

The love for art and the desire to do something meaningful, while serving his sentences, made Cosmos to become part of the art club, which is part of the project “The way of the new beginning” of “Mission Salvation” Foundation. He is drawn also by the good attitude of the team from the foundation. “I saw that people are good. That impressed me. I can read the people just by looking in their eyes. It always tells you if the person’s energy is positive or negative”, he says. And even though he has studied arts, he still thinks that there are more things that one can learn. He is visiting the art club from the very beginning until the moment he is released after the end of his punishment. About Nana Raycheva, who facilitates the activities at the club, he says:

“To me, she will always be the art teacher at the club. Nana is a person of gold. This is what I like about her. She is a modernist. Modernism could also have positive energy in the colors and in the shapes. The radiance of her paintings is incredible. I know that she has loved painting since she was a little child. Although she hasn’t studied painting, she keeps doing it and you see that her paintings are distinct. She’s got her own style. That means, she is and artist of class” – he doesn’t spare the flattery about her. 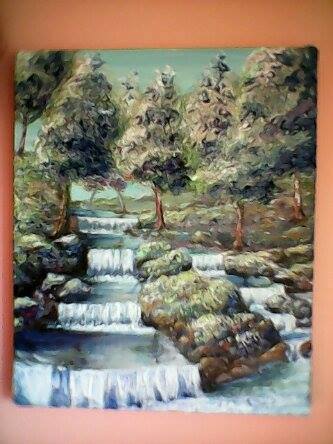 Hristo is a firm believer that every artist should search for his own style, and not copy others. He likes painting sceneries. “My style is realism with a slight hint of modernism.”, he explains. For him painting is rather hobby even though it is the thing that he is the best at. He likes experimenting with the materials he paints with. He tells, for example, that he has diluted the oil paints with the diesel used for the heating system of the prison.

“There are no materials in prison. It is hard to find paint. It had happened often to lack some color, so I decided to use latex and toothpaste for white. I need white the most because I dilute the other colors with it. This is why my paintings are lighter. I make them lighter because of the positive energy I want them to radiate.”

While behind bars, Cosmos is constantly getting orders for painting by the other prisoners. Amongst his customers have been some popular names of the underground world like Zlati Zlatev – The Golden.

“They gave them to friends, family“ – he explains. – I had been given advanced payments for three paintings ahead. Since they didn’t know what they wanted me to paint for them, they would give me the money and get the painting after a month. I hadn’t done anything else but painting and was responsible for the hygiene of the 9th squad. Dirty work, however someone had to do it. But they were paying me a wage, and why not take it. I have a child, and also an adopted son, I had to somehow help them.”

Thanks to painting, asserts Hristo, he hasn’t felt his time in prison. However, this period has been extremely difficult for his wife Roumi who had to fight all hardships alone.

“I was very angry to the world. It was hard for me to make it by myself – she shares. – Not long before he went to prison I lost my father. I wasn’t used to making it on my own, there has always been someone taking care of me. Suddenly, I had to look after two children and my mother by myself. I was upset with everyone, including him.”

Hristo is free for a few months now. Getting out of the prison door, he tells us about the challenges he is facing now:

“I felt dizzy. Everything looked like at a long distance. I haven’t had troubles with the finances. When I was released Nana helped me to sell one painting. She found a buyer. My wife also rented out the apartment and we moved to live in the village. I rather had problems with getting used, communicating with people because in prison the community is smaller, you see and communicate with less people, while out of prison you meet many. What helped me was probably the fact that I looked at people in a positive way, expected good from them. Otherwise, if I had looked bad on things, it probably wouldn’t start as nice as it is. Once I hadn’t punched my ticket and the controller came to check me out. I told him that I just got out of prison and he replied: “Get better, boy. You will make it”. I felt really nice, that this man believed in me. Sometimes little things help one to think positive and not to give up on what he has decided.”

Two of Cosmos’ paintings are part of the exhibition “Free to create” at the Center for Culture and Education “The Palace of the Happy People”. The initiator of the event is the teacher at the art club Nana Raicheva. A greater part of the art pieces are done by some of her trainees, who are serving their sentences at the Sofia Central Prison. The exhibition itself is for a charitable cause. Part of the money, collected by selling of the paintings, is going to be used for children’s training of imprisoned parents, as part of the project “Happy Child” of the Mission Salvation Foundation. One of the already bought paintings belongs to Cosmos. In order to show support of the way of the new beginning, which he headed on to, the Foundation, has also provided for him some of the needed materials for painting. Hristo is not afraid to move forward and to the past he looks philosophically. “Everywhere, even in the darkest thing, even in prison, there are good souls. The darker the place, the brighter the beam of light is.”